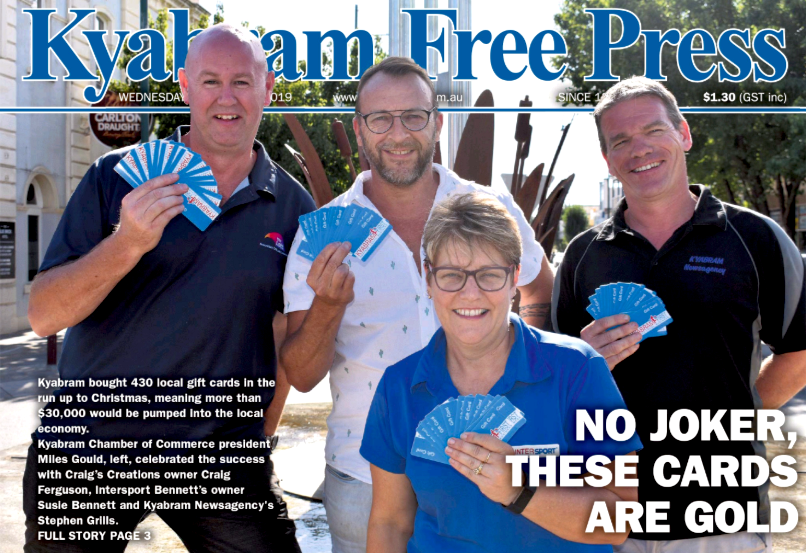 KYABRAM’S local gift cards started as a small idea but have quickly turned into a phenomenon.

A whopping 430 cards were loaded between October 1 and December 31 with an average load of $72, meaning more than a $30,000 potential economic impact for our town.

The idea of the Kyabram Gift Cards is to put money on an eftpos card that can be used at participating outlets in town.

“The first few months were a bit slow, so a big chunk of that sum has come in the past 123 months and we are absolutely thrilled,” he said.

“We didn’t advertise much at the start but the word has got out it’s gaining popularity.

“To have the cards produce that amount of money into the local economy is incredible.”

Mr Gould said the cards are an attempt to help people see the fantastic options Kyabram has to offer.

“What we are seeing now is a lot of work places and sporting clubs are giving them out as gifts or awards,”

“it has really gathered some momentum of late, and it’s one of the best things the chamber has come up with.

“It shows the chamber have done something the town wants and it’s keeping the money local, which is good for everybody.

“It is all about helping out the town, that’s what the gift cards are trying to achieve.”

A minimum of $10 can be put on the cards, which can be purchased from Ky Lucky Lotto and the Kyabram News agency.

“We had seen it work in other towns around Victoria and Australia and thought it was something worth doing,” Mr Gould said.

“It is essentially cash in hand, because people can spend the cards where ever they want in Kyabram if the business is part of the chamber.”